Biblical Examples of the Conflict of Faith with Contrary Reasonings 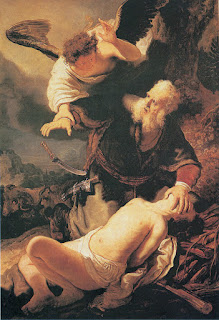 Abraham had faith in God; that is to say, under the influence of the light which God had given him, light which had been addressed to him as a perceptive and rational being, he believed that God is, that all things are under his control, and that in all his dealings he is perfectly just. His mind, in the exercise of faith, rested fully and firmly in the general proposition of God’s existence, superintending providence, and holiness. Nevertheless, it is entirely reasonable to suppose, that, when he was called, in God’s mysterious providence, to the fearful and afflicting office of sacrificing his own son, human reason, in distinction from that higher reason, which is embodied in a well established faith, took occasion to suggest a multitude of doubts and inquiries. But he remained unshaken. Faith, holding on to the general proposition of God’s wisdom and goodness, at once rejected all suggestions, that were inconsistent with them.

Many are the instances in the Bible, many are the instances in all periods and ages of the church, in which faith and reason have thus come in conflict. Job was a man of faith. He also, when his property and children were taken, and when he was exceedingly afflicted in his person as well as in other respects, had his inward trials undoubtedly; resulting from the inability of human reason, in its ordinary operations, to reconcile the apparent dealings of God with the goodness and justice of his character. But faith, in the severe inward conflict to which he was subjected, prevailed against reason; and he was enabled to say, “The Lord gave; and the Lord hath taken away; blessed be the name of the Lord.”